Have you made changes to your coach? Improvements? Remodel? New technology? Tell the story and show some pictures here.
Post Reply
15 posts

Wow. Not sure I'd ever take that on.
Thanks for all the photos, helps tell us where stuff is.
Do yourself a favor, if you are going to keep roof airs, run ducts and use ducted units. Much quieter and work better.
1996 Sahara Center Door
Top

He already completed this project.

I have a lot of respect and admiration for people who have the guts and tenacity to go through with massive daunting projects like this.
It is also interesting to see the skeleton of the coach and how it was built. 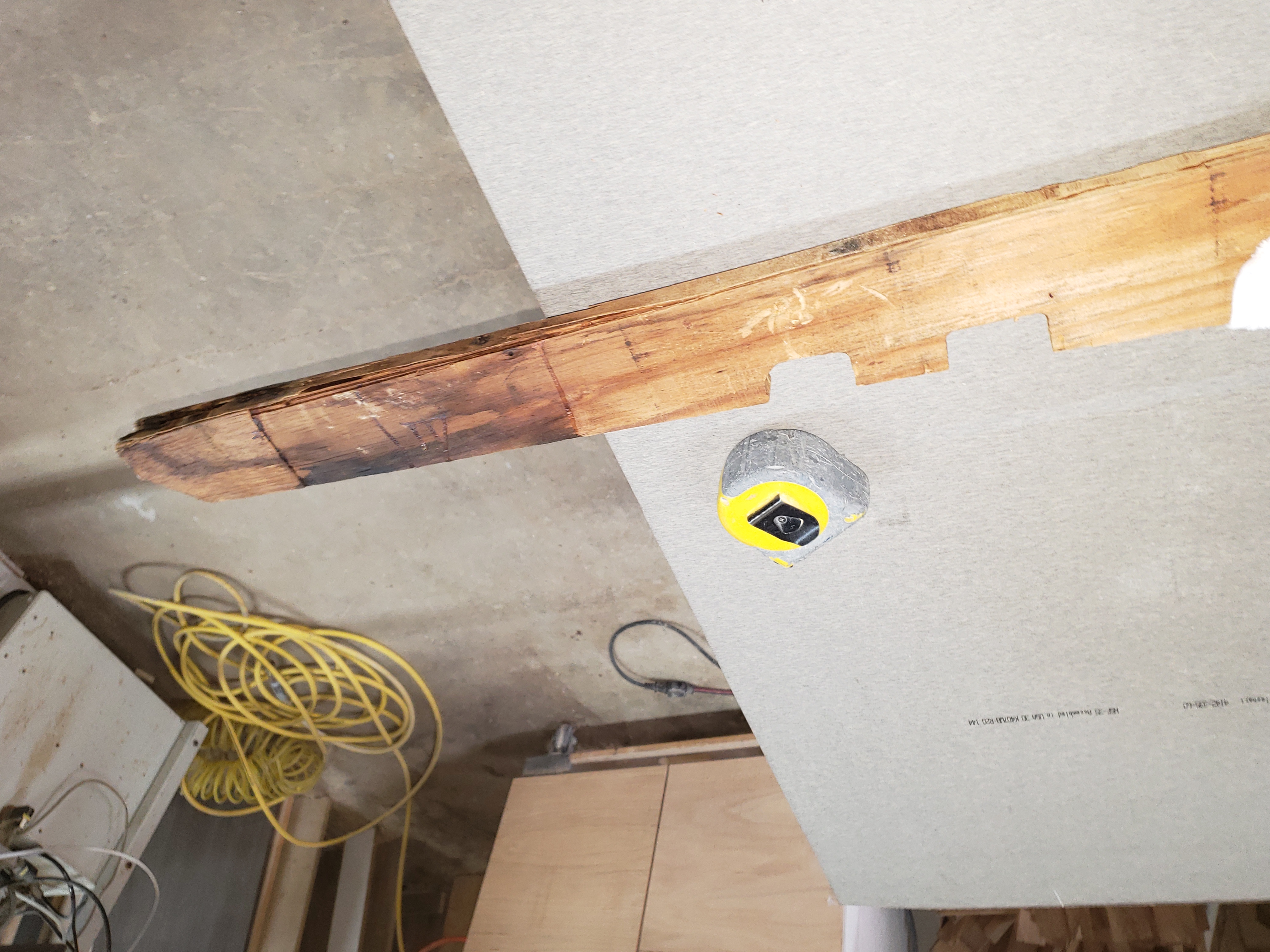 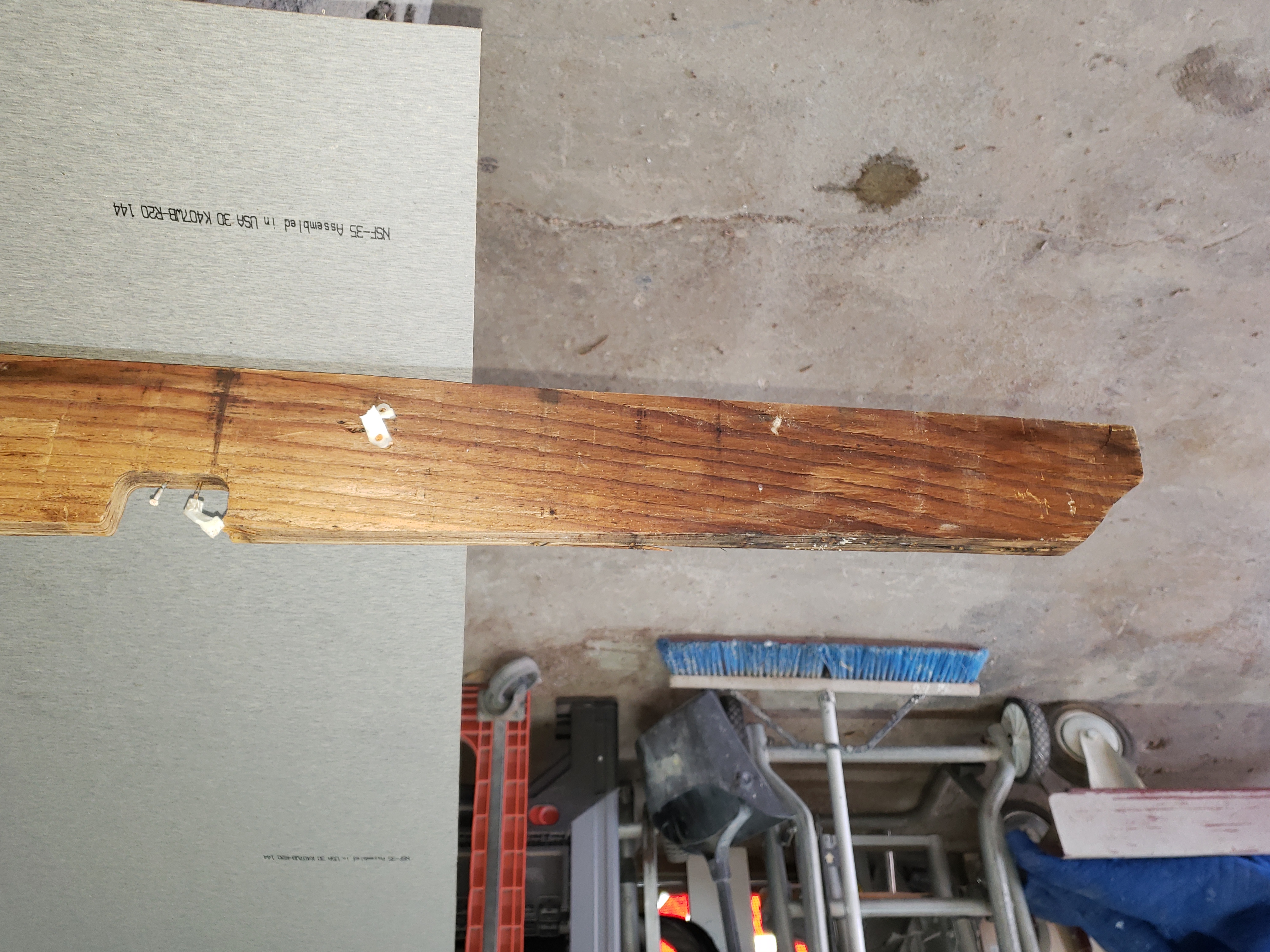 we basically remade the exact shape truss out of plywood same as factory, orginally they used a notch for the wiring with a metal plate i went a different route for a little more strenth youll see later.

the rv also had roughly 32 trusses from front to back i think we added well over 40 and doubled up in high stress places such as the ac and front and rear caps. 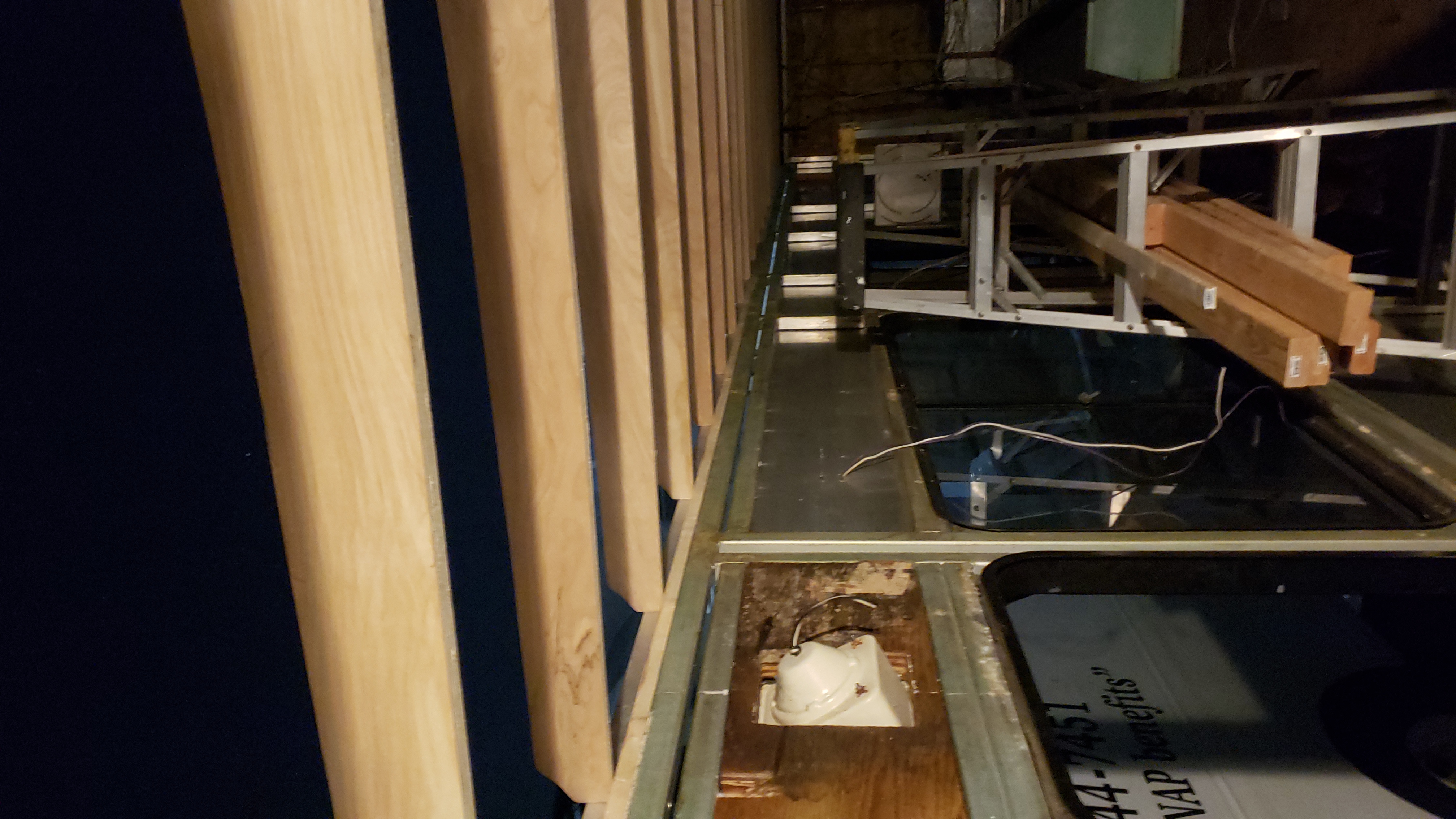 sorry for the limted amount of new roof shots we did this in florida and were in get it done asap mode.

we also added that side wood under the aluminum side rails to which made the roof roughly a inch higher and prevents water from ever sitting on top. we also added 2x4s between trusses for added strength and let me tell you the roof feels SOLID it even when jumping up and down on it. 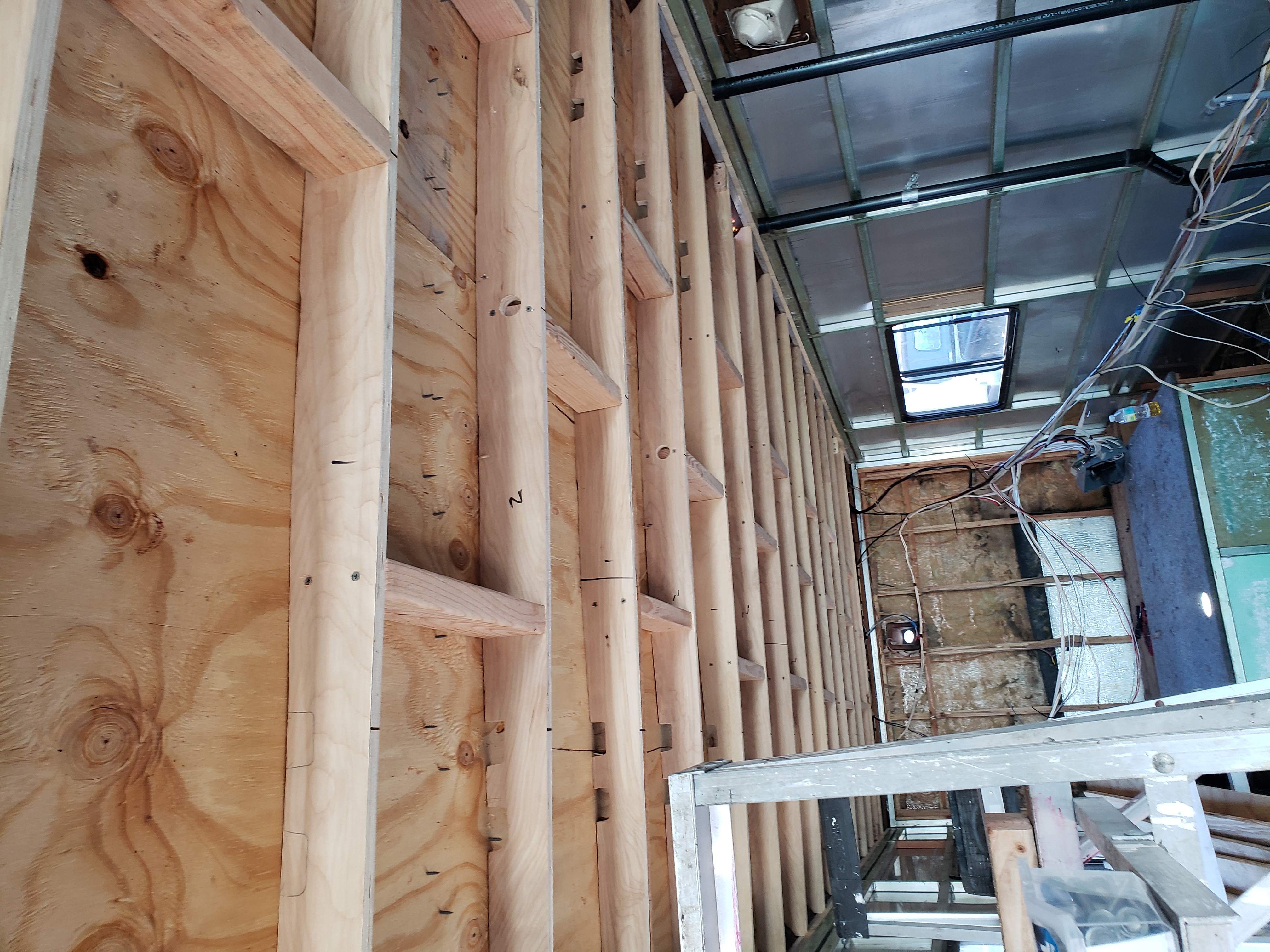 so instead of notching the trusses i decided to drill holes in center the only way a screw could ever hit a wire is if a longer than 2 1/2 inch screw is used so i know never to do that now when working on roof. i also doubled up on more of the trusses with the orginal non water damaged trusses because overbuilt is better than underbuilt? roof completed with the superflex rv roof rubber. you can see some uneven spots but they really have become less noticable if i were to do it again i would use double the amount of glue i used but i know this should last atleast another 20+ years as is. 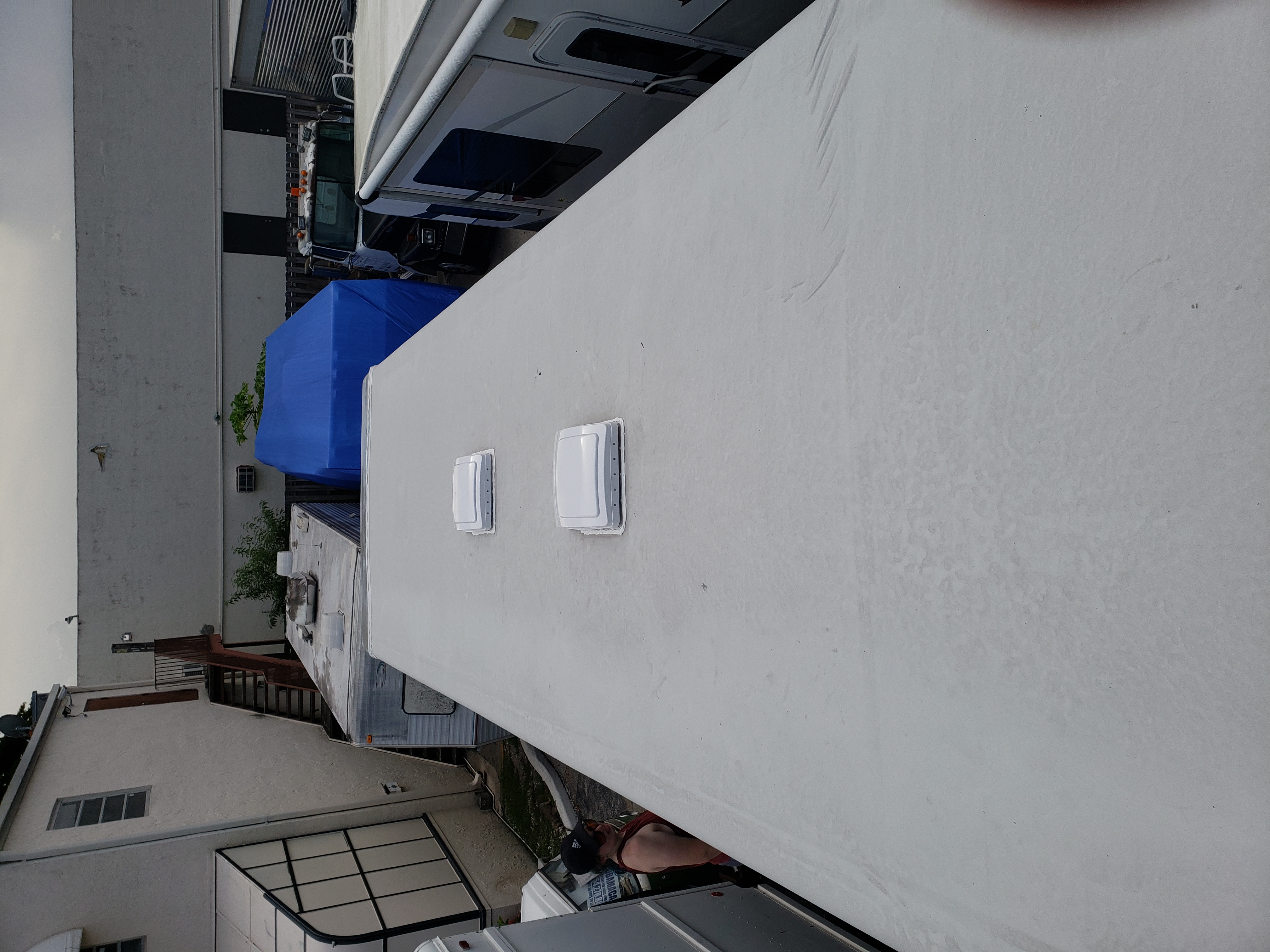 side shot of roof i actually pulled the material down the side covering the fiberglass side caps to further water proof. 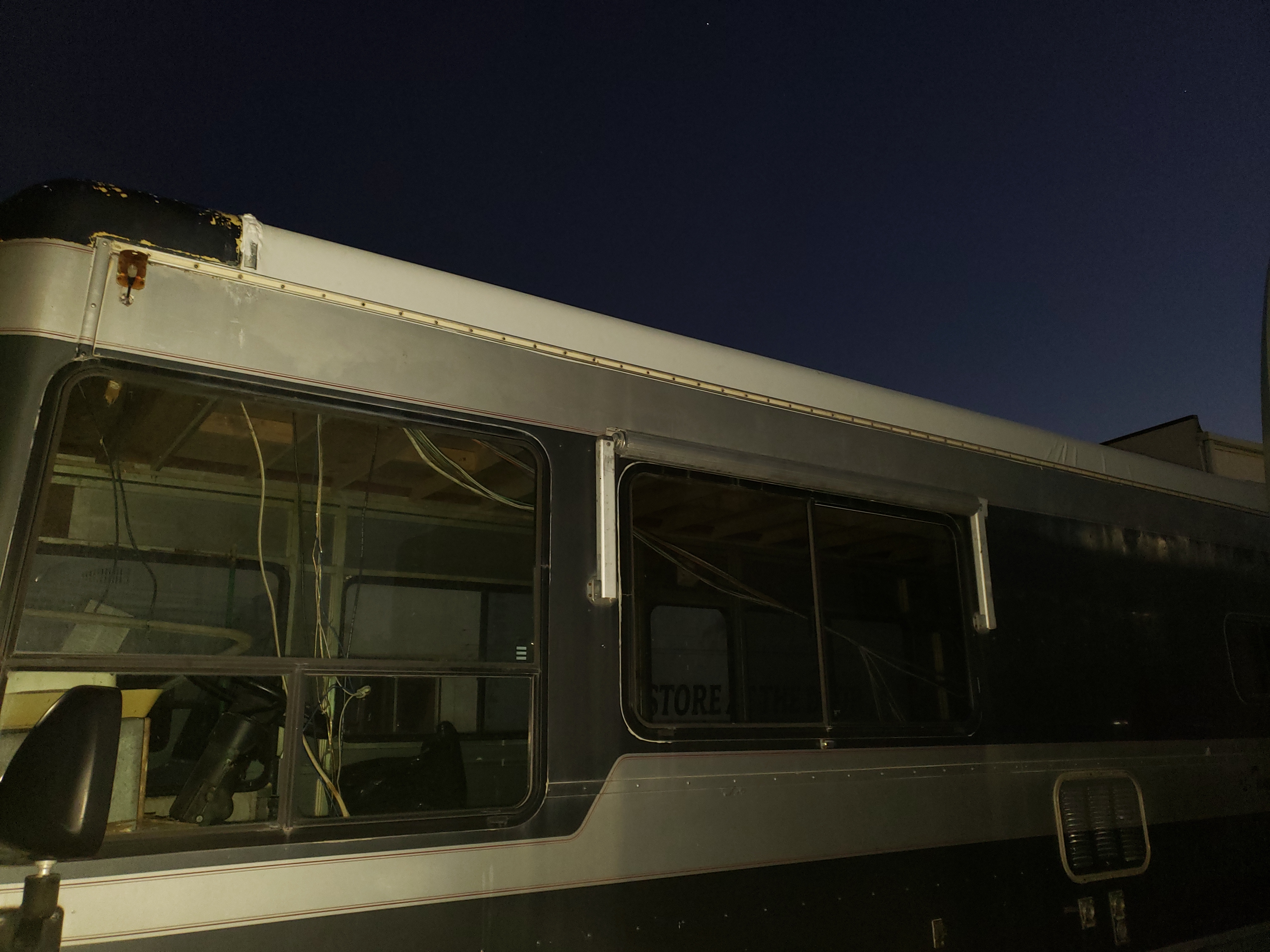 roof acs on the orginal coleman super machs still work to this day blowing 39C air! in 90+temps i will be very upset when they decide to die.
you can see i eternabonded around the vent fans the company makes drop in replacement units and the bracket is basically protected from the elements so should virtually last a very long time. 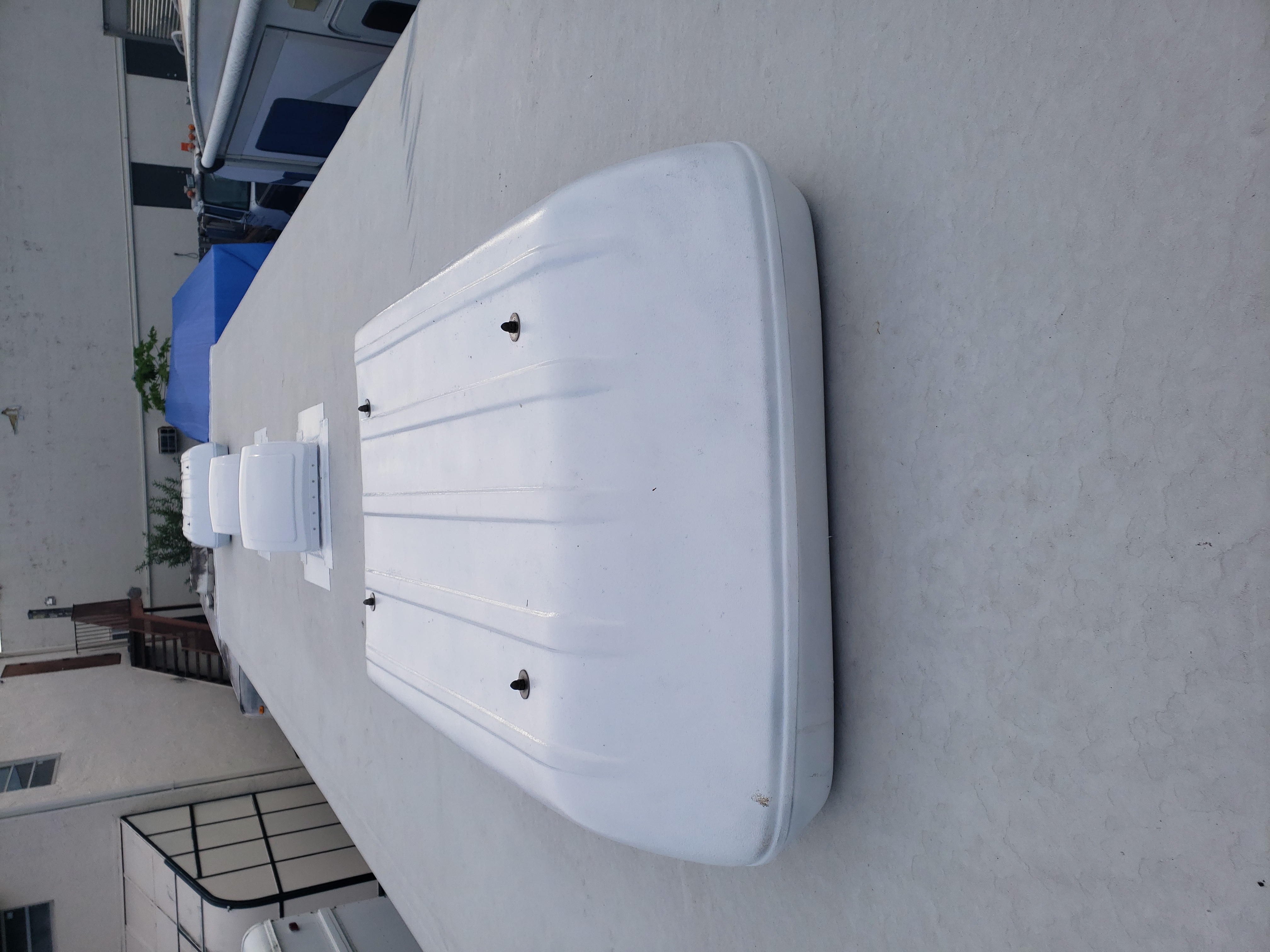 i used a rubber coating on the front and rear cap because i saw mirco pinholes of sunlight coming through the fiberglass end caps.
where the endcap stops and roof material starts there is a aluminium band i ethernabonded over this aswell as it seems to really be a leak prone area on most rv roofs. so the floor: its held down with about 50 or so carriage bolts that are TIGHT but thats the only thing holding your house to the chassis the rot probably helped us with removal aswell as grinders, chisels and every type of prying tool known to man.
the orginal floor goes under the actual wall its impossible to get it back under so we had to get as close as possible and add new channel against the wall for the wood to sit on. 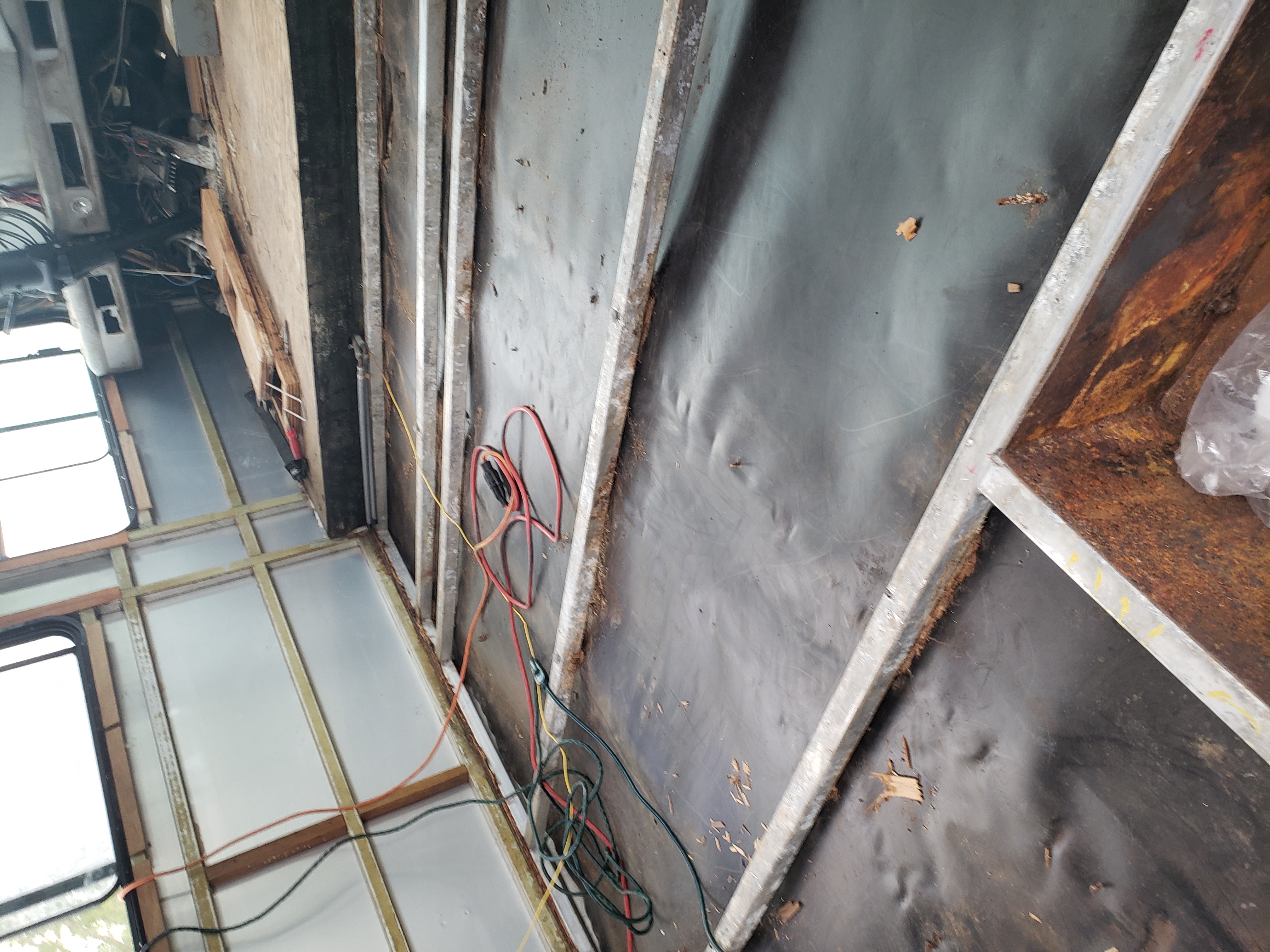 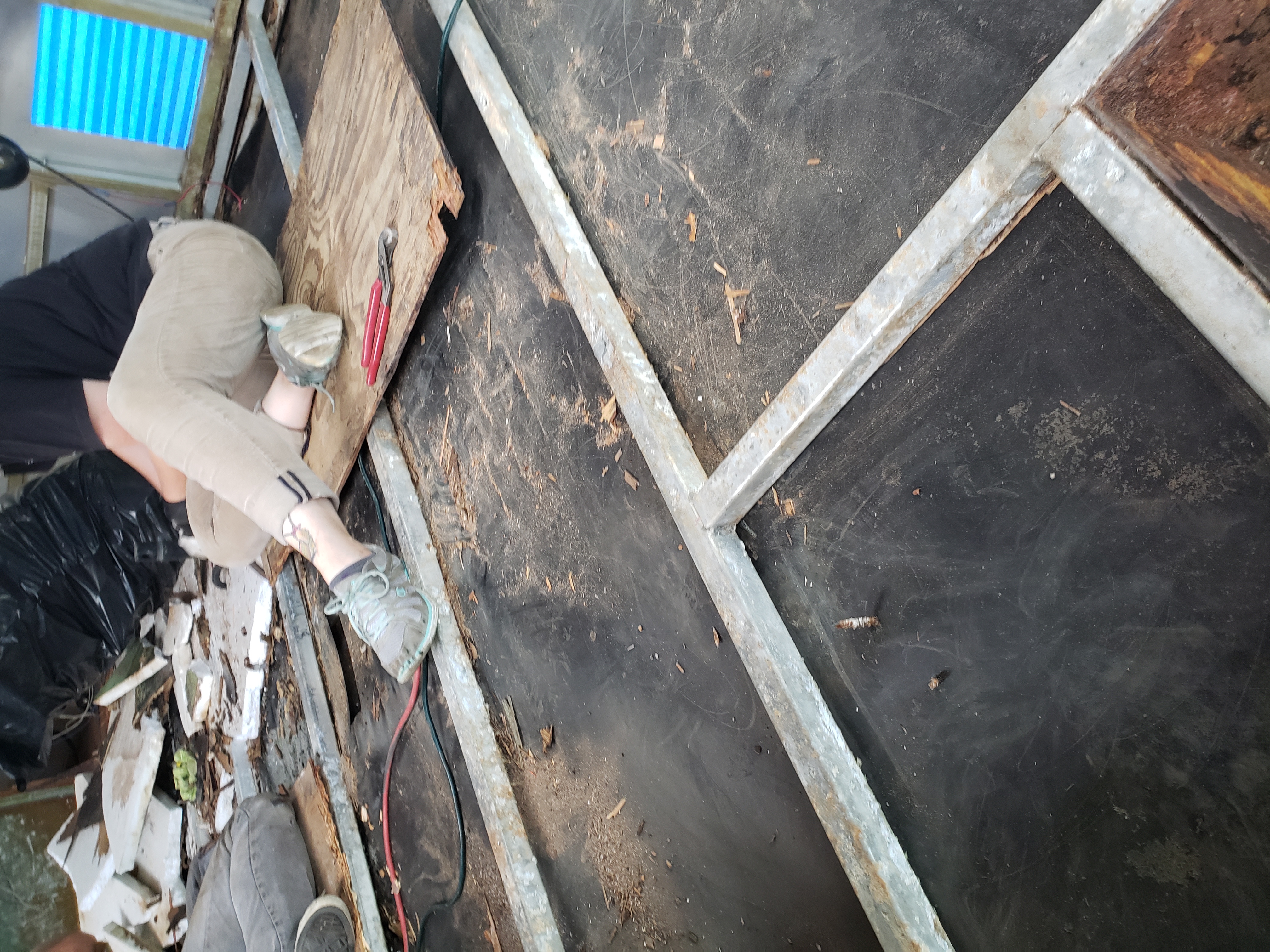 the black sheet is a moisture barrier with a piece of underlayment between it. mine was all rotted out so i just removed the underlayment so now you can see the sheet. we ran about 500 fender washers from the bottom up so it never comes loose. 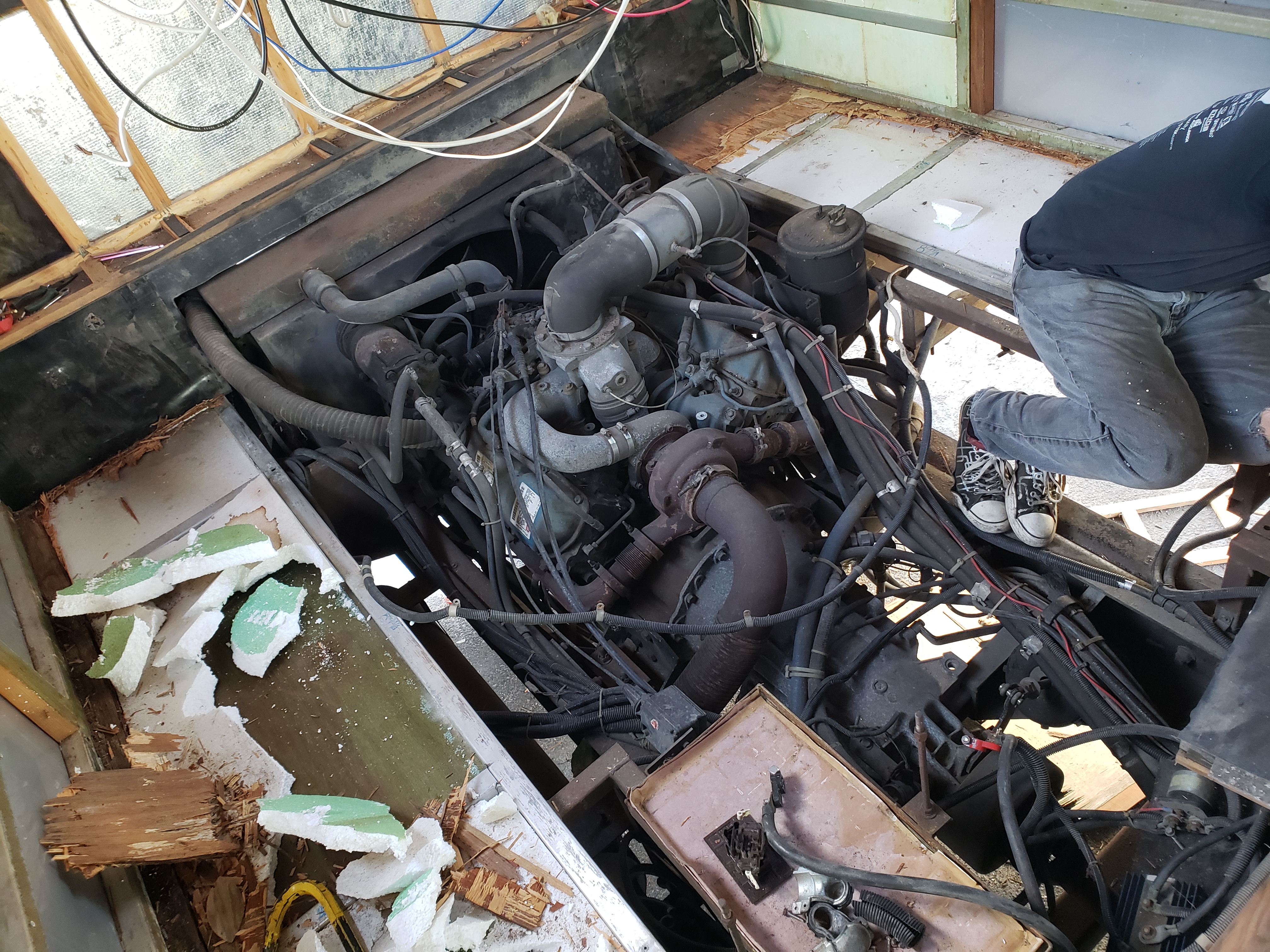 no steering wheel or dash there has to be over 20000 wires on this thing, new plywood i went with 3/4 THE FLOOR IS SOLID now i mean took that rv spundgyness completely away. used wood to metal self tappers that self level below wood. factory used like 4 screws per sheet i used probably about 40-80?
the orginal styrofoam was garbage not sure if i would even have called that styrofoam i replaced with higher density stuff, this was my wifes favorite time in the project she got to cut hundreds of custom sized peices with a hot knife. 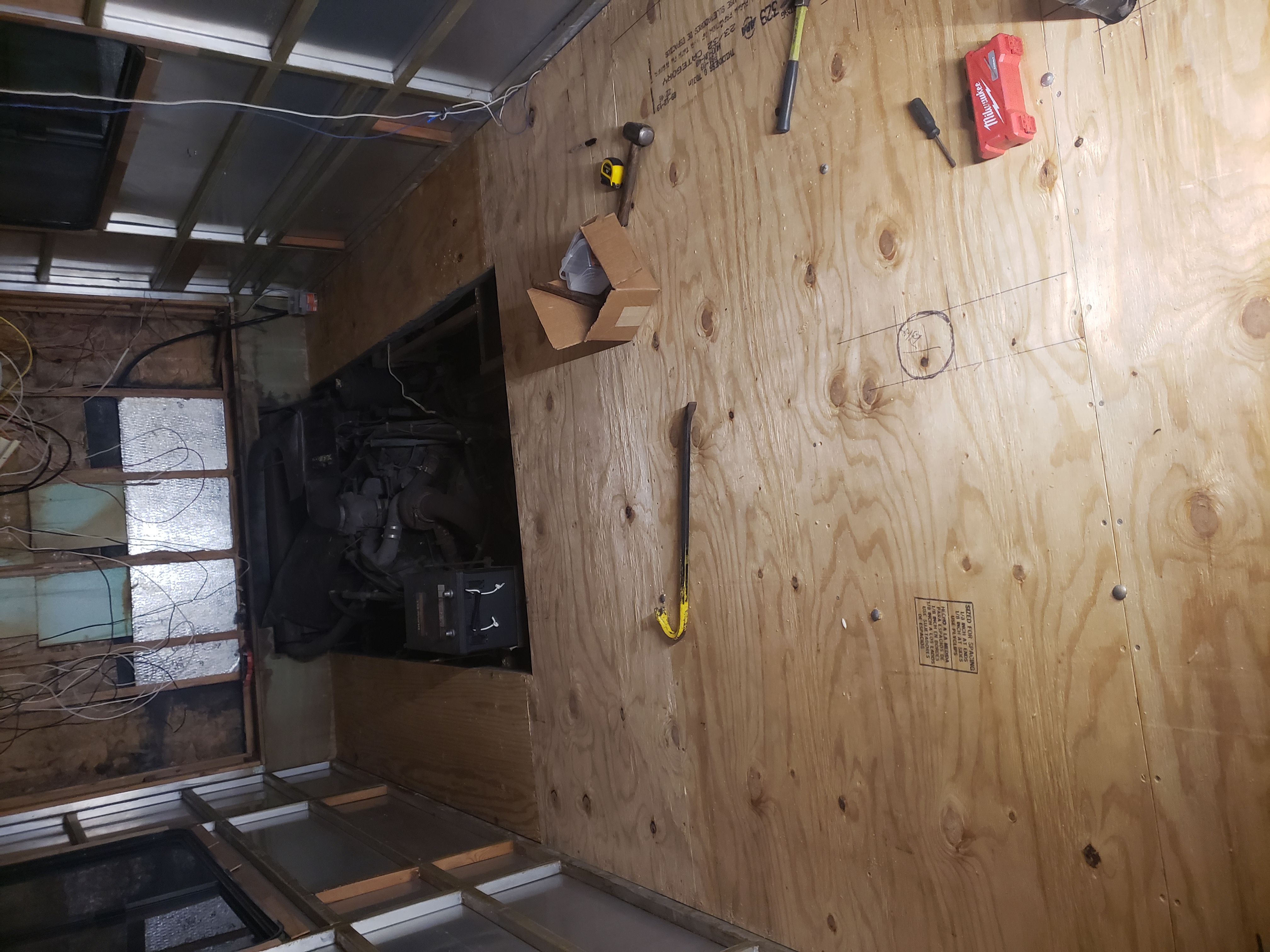