Pretty much everything on the bottom side of the coach: Steering, wheels, tires, brakes, suspension
Post Reply
12 posts

I know there is a lot out there already on tire pressure but I need a little validation as I am heading out tomorrow for a week.
The PO for this coach had Hercules Strongarm HRA tires put on all around - 275/70/22.5. It looks like these are low end tires but that is what is on there at the minute. I have downloaded the tire pressure spreadsheet and entered in the data that I have but I cannot find for the life of me the following pieces of info:

When i enter the details that I have into the spreadsheet it tells me that the fronts should be at 69 and the rears at 76. This is with a weighed front axle weight of 9120 and rear of 17960 (this had a trailer on the back but it was off the scales so assume a tongue weight of ~300lbs)
Can anyone help validate the inflation numbers of 69/76 - just seems low to me but this is all new to me so might be good ?

Thanks as always - Ian

Ian,
Without being able to see the chart that you are using, I'd always error on the side of caution and increase the pressures up one step. Looking at what information is out there, it appears that you are running 16 ply load range H tires? Without having your axle information, I put what you gave into the spreadsheet that I use and came up with closer to 90 front and rear (again, not having max sidewall pressure and axle ratings I just guessed). I found your tires but not the actual load charts, so it's hard to be of any real assistance. What pressures were in them before from the PO?
Duane
96 Sahara 30', 250hp Cat 3126
Allison 6spd MD-3060
Spokane WA
Top

Hercules tires are made by Cooper, so the best I can do is provide you with cooper's tire load inflation chart (see link below).
By their chart, you would have a generous, but not excessive, safety cushion to carry the load. Using the axle weights you provided, you would run 85 psi in the front tires and 90 psi in the rear tires. The front of these coaches tend to be on the light side, so you could actually run as low as 80 psi in the front tires and still have a small safety cushion. You can experiment with both 80 and 85, see which pressure gives you better handling and smooth ride.

Thanks in advance as always for the help that I get on this forum - much appreciated!!!!
Tires are H load - 16 PR
Date code is (I think) KN CECBK3 - that’s the DOT number which is what I think I am looking for.
I had the front at 85 when I left the house on Thursday and I haven’t adjusted the rears yet.

Yes, that is correct, they were manufactured on the 38th week of 2018. People on other RV forums seem to be happy with Hercules tires, so you should be set for a while.

Thanks John - I’ll get the rears to 90 in the am for the next leg - tires seem to ride well but I have nothing to compare to though?
Thx again !!!!

From what I understand tires of the same size and load range are supposed to carry the same weight so any brand tire chart will do. The suggested pressures should be pretty close. I've run 85 front and 95 rear on 255 tires based on 4 wheel weights. Now I'm running the same tires and size as you, but my rig is loaded to the gills and I have a 600lb motorcycle and lift hanging off the back end so I'm running 95 front and 105 rear. I have the factory tire size/inflation label right next to the drivers seat above the console. It calls for 115lbs all the way around for 255 70r 22.5 tires. That's at the maximum axle weights. I ran those pressures when I first got it and it was like driving on solid tires. Everything rattled. After adjusting the pressures according to weight on an inflation chart, the ride improved greatly.

Please note that the pressure on the chart is the MINIMUM to carry the specified load. Suggestion is to add 5lbs. That way if you lose any pressure the tire won't be overloaded. Other than possible irregular wear, too much pressure only harms ride quality as long as you don't exceed cold max pressure listed on the tire. It's better to err on the high side when in doubt. Underinflated tires = overloaded tires. Overinflated tire = harsher ride.

I just had a set of the Hercules Strong Guard HRA tires installed, and I have to tell you they ride much better, and quieter, than the Yokohamas that they replaced. I really like the tires. They are quiet and smooth. I wouldn't consider them a low end tire. They are well known in the trucking and delivery industry. I found a lot of posts from RV people who liked the tires, and felt they rode as well as the RV specific big name tires. That's part of the reason, and cost, that I decided to put them on my rig.
Tom Masterson
1998 Serengeti 3706
300hp Cat 3126, Allison 3060
600 Watts of Solar
17cf, Fisher & Paykel residential Refrigerator
Top

The tire pressure that I suggested to Ian included that 5 psi cushion, going by Cooper's weight inflation chart, he could actually run 80 in the front, and 85 in the rear and his axle weights are still a bit under what the inflation chart shows. Like I stated in my post to him, that 85 psi front and 90 psi in the rear gives plenty of safety cushion, going any higher than suggested can adversely affect his handling and ride.

I fully agree with you that underinflated tires is dangerous, but over inflated tires has its dangers too, albeit less. Overinflated tires on coaches, especially some of the Safaris which are know to be disproportionately light in the front axle, can cause very poor, tail wags the dog, white knuckle type of handling, or more accurately put, lack of handling. It can also cause irregular wear, like river wear, and a very harsh ride. So it is not as simple as just harsh ride, the tire inflation charts get issued for a reason, and the numbers the manufacturers give, also has a safety cushion built in, to avoid lawsuits.

As for tire inflation charts being the same, even though most are similar, they are not always the same. As someone recently stated, Michelin has slightly different inflation numbers, and I have also seen slight differences in tire inflation with same manufacturer on different tire models. My guess would be that some tire models might run a bit hotter, so they increase the pressure per weight carried. The other difference I noted lately, is some manufactures allow a minimum inflation of only 80 psi or 85 psi for H and J rated tires, compared to the more common minimum inflation of 70 psi. Goodyear is one example of that, their charts show 85 psi minimum for H and J rated, but 70 psi minimum for G and F rated tires. Cooper's chart on the other hand shows 70 psi minimum for F, G, H, and J tires.
So when possible, it is better to look at the charts that your tire's manufacturer issued.

Being that Safaris tend to be on the light side up front, how is your coach handling the motorcycle and lift on the back?
Has it caused a lot of weight shift to the rear, any negative affects on handling?
John
'95 Serengeti, Cummins C8.3-300
Allison 6spd.
Top

Saw this conversation a few days ago, but did not have access to my '98 Continental until today (it was in the shop for some maintenance work).

Here is the sticker from the driver-side console in my coach: 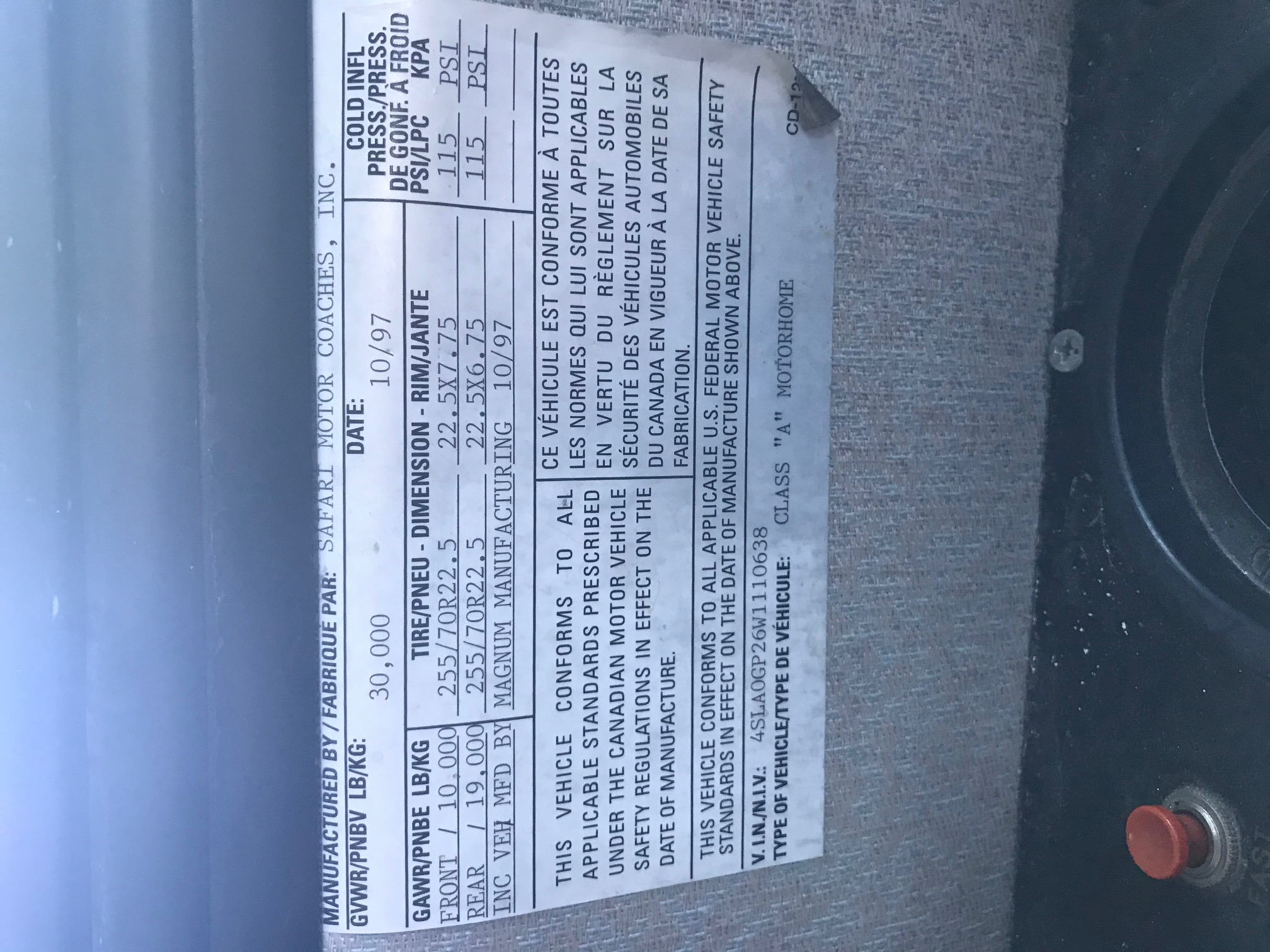 
As you can see, the placarded cold inflation pressure is 115 psi for both front and rear. I run Toyo tires on mine, and have them set to 110 psi cold on all four corners.
Brian