Forum for both AC and DC electrical components. From engine alternator to dashboard, inverter to batteries, and everything electrical in-between.
Post Reply
39 posts

Hi again, sorry for the delay, I had to go with the kids on the lake, after all, we're in vacation!

So, back to business now. Voltage reading on the sense wire: 0. I think that my procedure for the test was ok (see https://pasteboard.co/JkgigE7.jpg, what I think is the sense wire is pointed by a red line). I've also tested the center lug of the battery isolator (red line on this https://pasteboard.co/Jkgjdxw.jpg) when engine was running (asked my wife to increase RPM but coincidentally, the RPM meter does not seem to work). Anyway, the voltage reading was also 0. Test on the left and right lugs (blue lines, same picture) and voltage was something like 1.30 but it varied a lot.

P.S. thank you John for your proposal but my generator is not working. Good to know anyway that I can do this kind of thing. Maybe it could be useful in the future...
Top

Please do these tests and let us know what readings you get.
John
'95 Serengeti, Cummins C8.3-300
Allison 6spd.
Top

Thank you John. Question: about the picture of the alternator that I've posted before, is it a front view or a back view? Can you provide a link with a schematic of the kind of alternator I have so I can locate more easily the sense wire?

About the testing I did on the isolator studs, I'm pretty sure I did it right, exactly as you described. Anyway I will do it again and also search for the wire that goes from the isolator stud to the engine battery.

Oh and just one more thing: is it possible that this wire that is connected to the negative terminal and that is coated with red plastic. I talked about it sooner in this thread (and also posted a picture). Would it be possible that it has to be connected to the positive terminal instead? I will try to follow it to see where it comes from. I'm not sure I will be able to return to you before our departure at 11:00 though.
See you later and thank you again!
Patrick
Safari Sahara '96
Top

Your photo is of the back side of the alternator. Finding the S terminal stud on the alternator is simple, it will have a visible S stamped right next to it, just like you see a visible R stamped right next the terminal that you have the red arrow pointing to. That said, not all ACDelco alternators had an S terminal, and upon a closer look of your photo, it is likely that someone replaced the alternator with the wrong one, and eliminated the S wire feature, so your batteries are not getting an ideal charge, but that is still better than no charge at all.
Here is a link that explains the benefits of having and using the remote sense wire feature. Note, this article does not discuss the use of a diode based isolator like our coaches have, which further drop the voltage by 0.7v, subtract the additional 0.7v from the numbers they provide, and it will give you an idea of how poor of a charge your batteries get. Once you get your initial problem resolved, we can discuss the option of converting your coach to a solenoid based isolator, using your boost solenoid as a dual feature, instead of just a boost solenoid.

For now, it is best to concentrate on retesting those outer isolator terminals for battery voltage, with the engine off, using the method explained in the last post. I also strongly suggest that you trace the wire that is connected to the drivers side stud of the isolator. It is not that hard to trace it, because it is a fairly short run to the batteries, just be diligent when you are doing the tracing, to make sure you are following the correct wire down to the battery banks. I'm not going to be near the computer much, so if you need to, you are better off reaching me by phone...
John
'95 Serengeti, Cummins C8.3-300
Allison 6spd.
Top

geantbrun wrote: ↑
Sat Aug 01, 2020 8:13 am
Oh and just one more thing: is it possible that this wire that is connected to the negative terminal and that is coated with red plastic. I talked about it sooner in this thread (and also posted a picture). Would it be possible that it has to be connected to the positive terminal instead? I will try to follow it to see where it comes from. I'm not sure I will be able to return to you before our departure at 11:00 though.
See you later and thank you again!
Patrick
Safari Sahara '96

I misread your post with the photo of the wire in the red sheathing, red should not go on negative. It is likely that that wire is your culprit BUT, you need to trace that wire in question, but it is best to first trace the wire that is connected to the drivers side isolator terminal, trace from the isolator down. Odds are likely that it will lead to the wire that is in the photo. I wish you would have called before your departed, I might have had you up and running...
IMPORTANT NOTE: DO NOT use your boost switch until you have checked and trace that isolator wire, because if it is connected to the negative, hitting the boost switch will short the batteries.
John
'95 Serengeti, Cummins C8.3-300
Allison 6spd.
Top

Hi to everyone,
Back home! I had charged my batteries all night long, voltage reading before departure: 12.9. While driving, the voltmeter on dashboard showed something like 10.5V (picture "meters"). RPM meter does not work as you can see on the same picture. Upon arrival, voltage reading on batteries (engine running, fast idle) was 11.99!

I traced the wire that comes out of the battery isolator, driver side. It goes into what seems to be a solenoid (is it what you call the "boost solenoid"John ?). See picture "isolator_solenoid" (black wire comes out of isolator on left, enter into "solenoid" on right). From there it continues to chassis battery, positive terminal.

I repeated my test procedure to check the voltage on isolator stud (driver's side). Again it's something like 0.25V (picture "isolator_driver").Did the same on isolator stud, passenger side (picture "isolator_passenger"). Around the same (0.44V). I think that you can see the different readings if you zoom in the pictures. Is it possible that the problem is the isolator itself?

Did not have the time to find the sense wire on alternator yet.
Best regards
Patrick
Safari Sahara '96
Allison 6sp 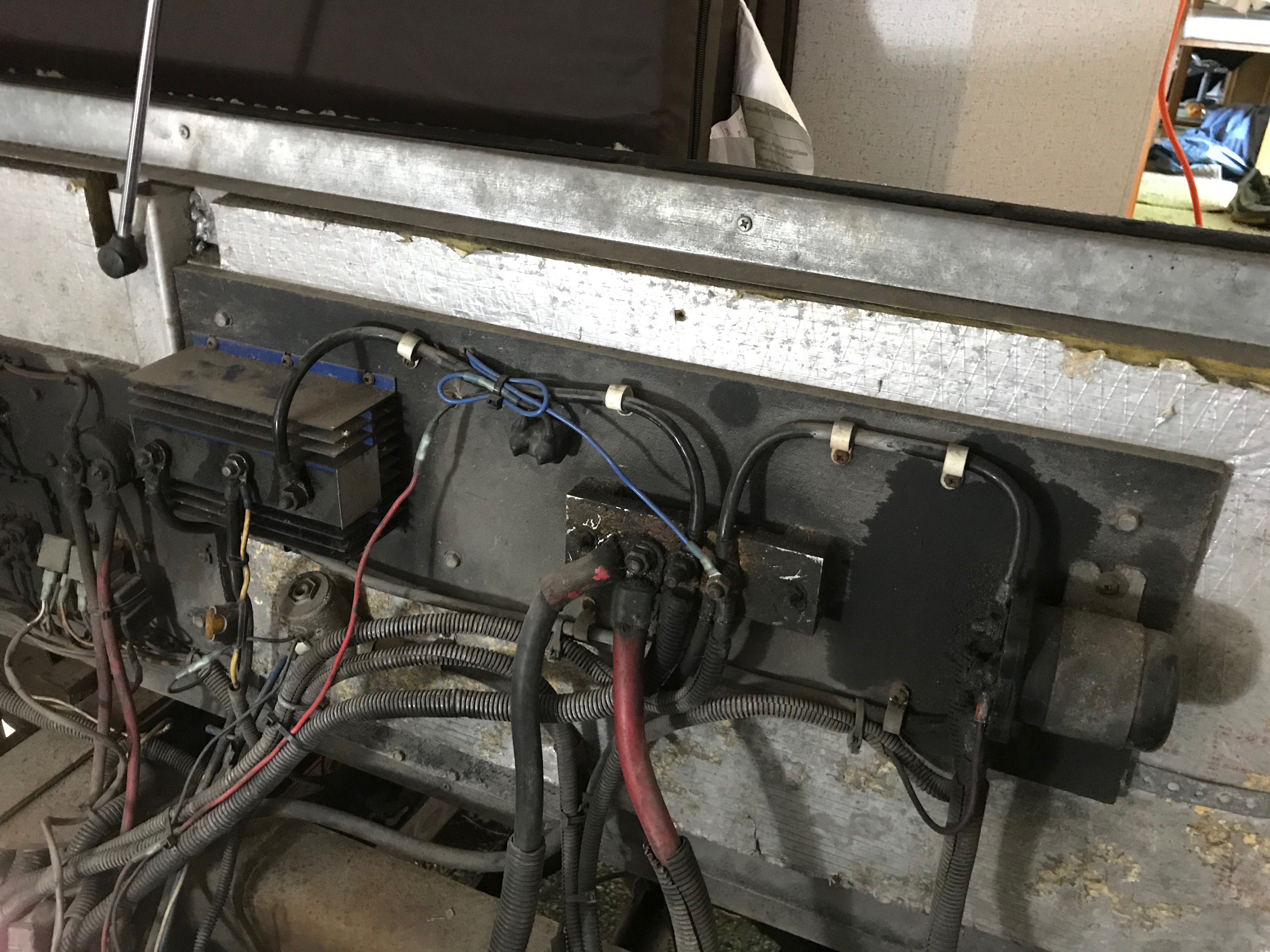 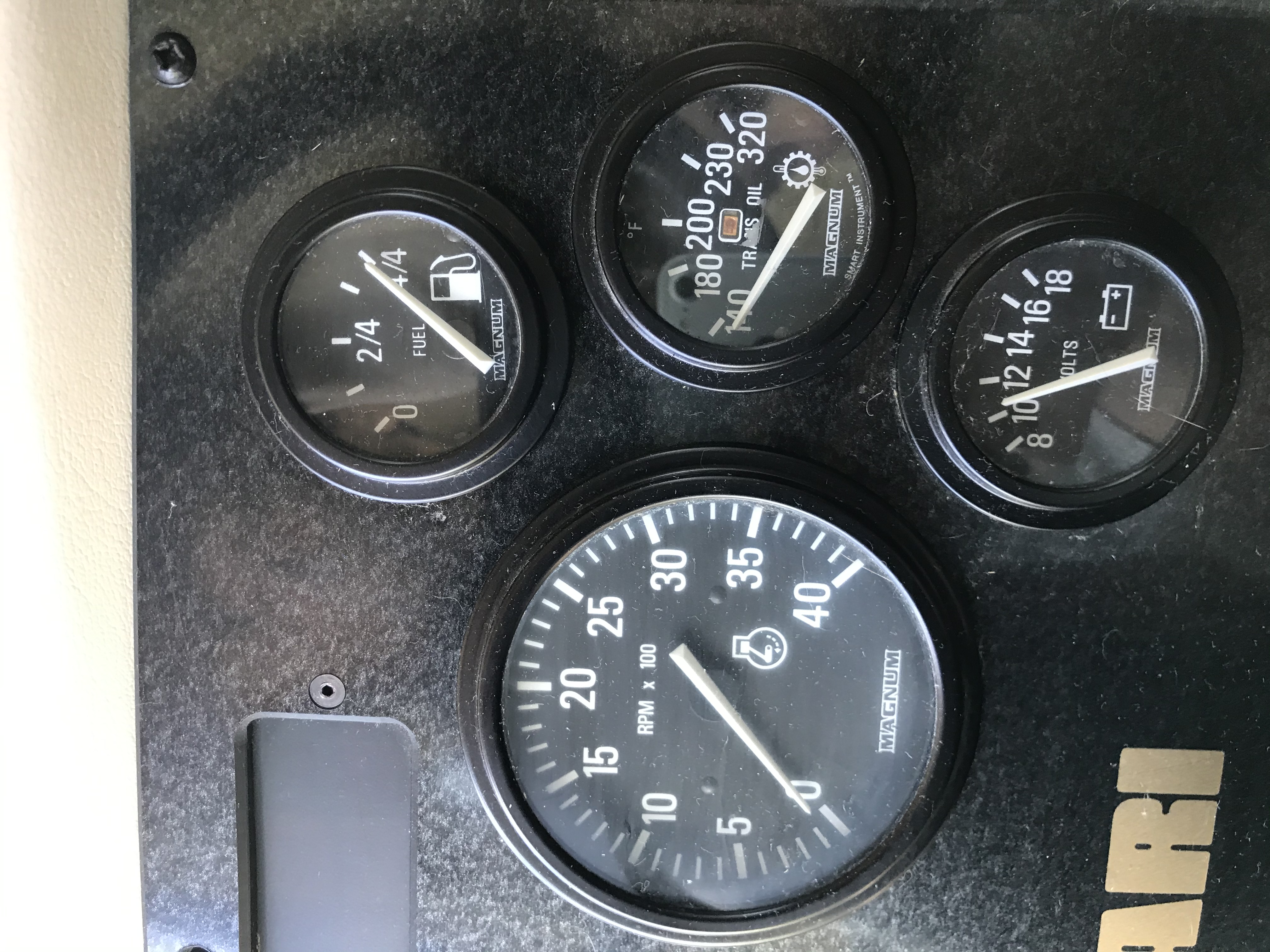 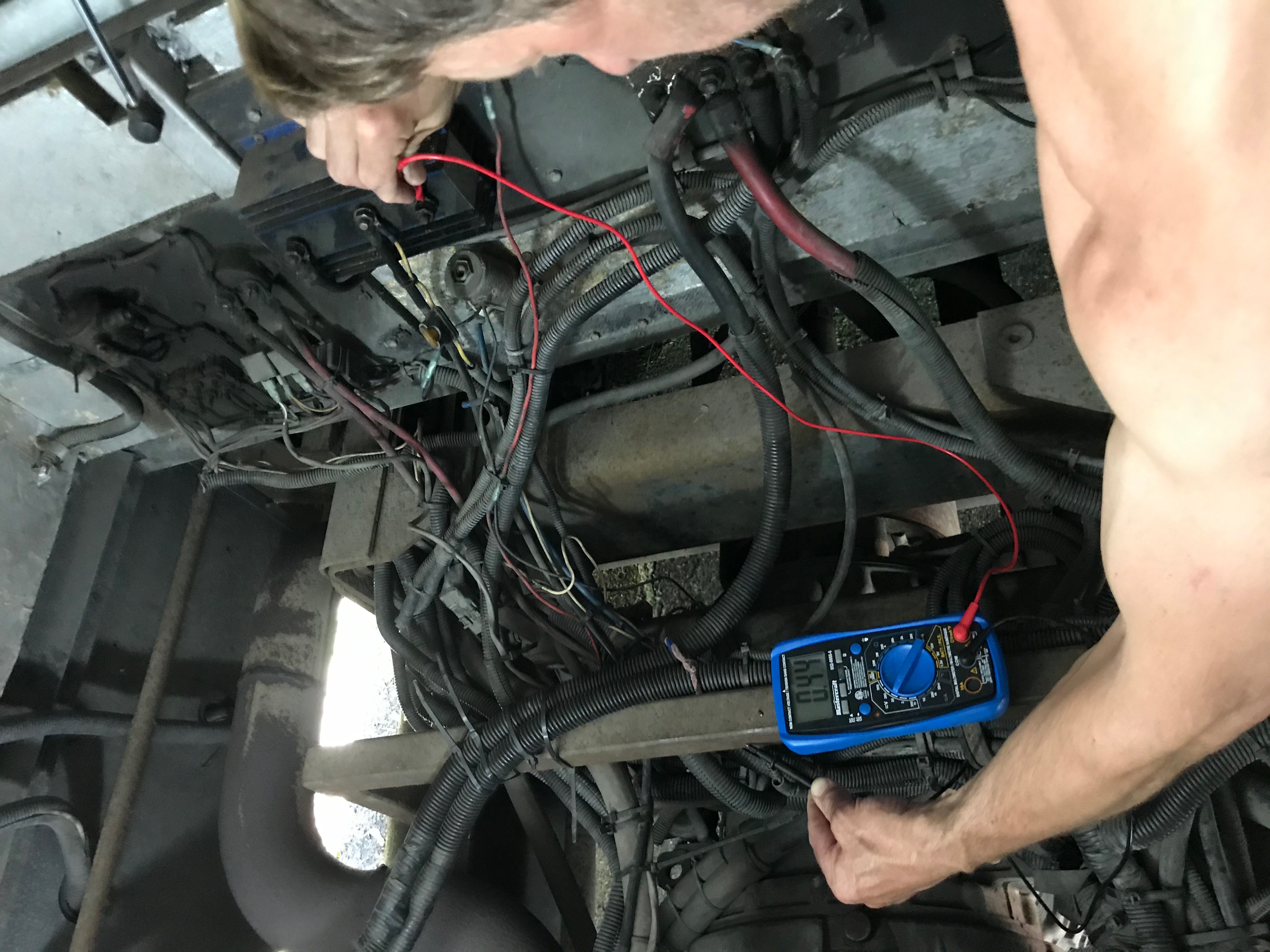 Sorry, you have either bad readings (very likely) or some really messed up wiring.

Those outer left and right lugs of the battery isolator are connected by those large-gauge cables directly to the battery banks (one to chassis, one to house).

Try again, insuring that you have good clean metal for both ground and positive.

And, start the engine and raise RPM to around 1,100 RPM. Check voltage at the center stud of the isolator and/or at the B+ terminal of the alternator (readings will be the same, as they are connected by that large-gauge wire. Then check again at the outer lugs.
Brett and Dianne Wolfe
Ex: 2003 Alpine 38'. Ex 1997 Safari Sahara. Ex 1993 Foretravel U240
Moderator, FMCA Forums 2009-2020
Chairman, FMCA Technical Advisory Committee 2011- 2020
Moderator, http://www.dieselrvclub.org/ (FMCA chapter) 2002-
Top

Thank you Brett. I'm pretty sure this big black wire that comes out of my isolator, driver's side (in blue, picture named isolator) goes into a structure that seems to be a solenoid. From there it goes to the chassis battery. Second picture (named solenoid) shows that same black wire that enters the solenoid (blue) and a second big wire (red) that leaves it from the same terminal (red square). Is it possible?

I will try to clean all these lugs and take a new measure. Is it safe to remove the lugs in order to clean them if I disconnect the negative cables on my chassis battery? I'll also try to take a measure directly on B+ terminal of alternator. Is it on the front or on the back of the alternator? 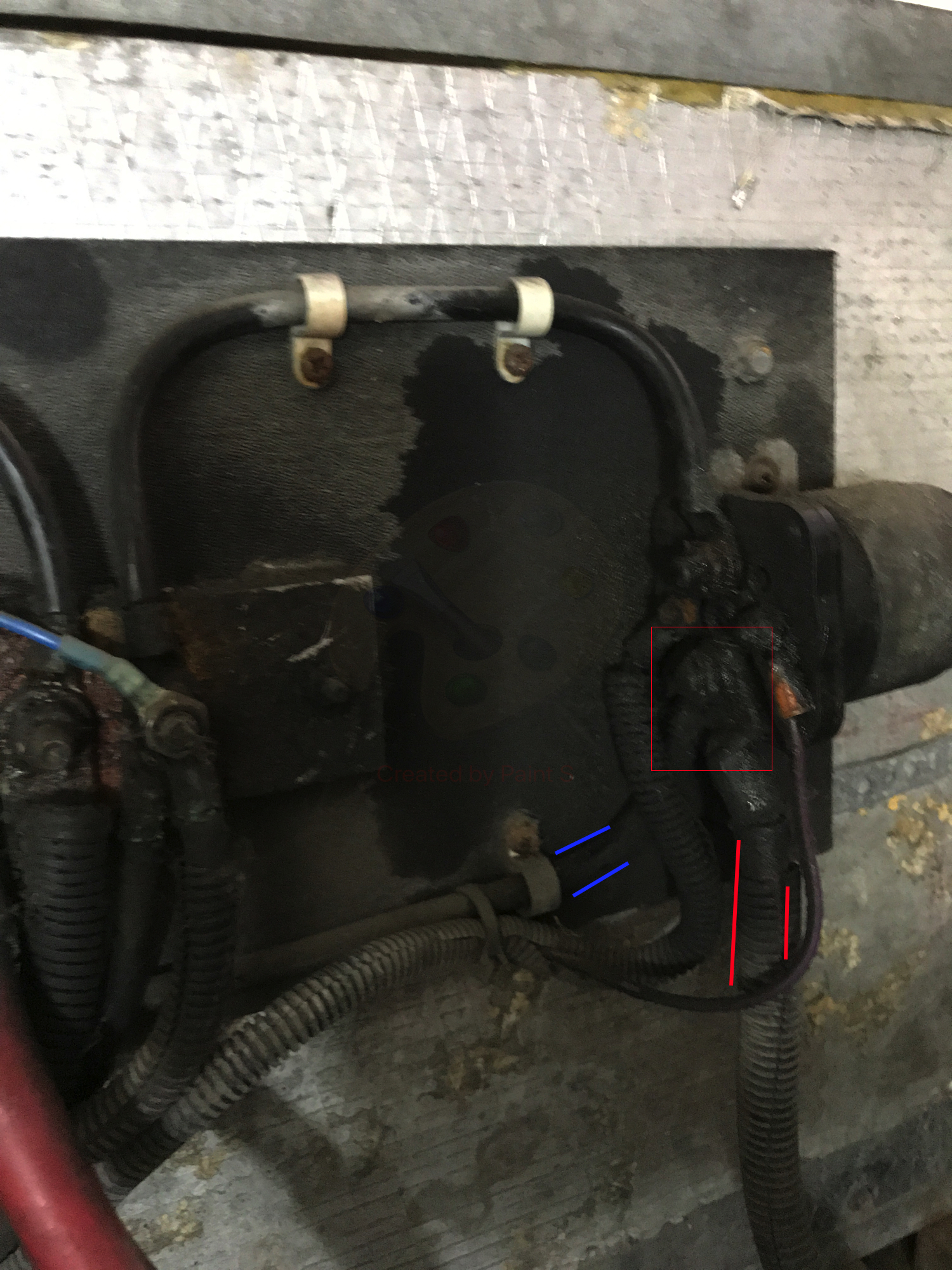 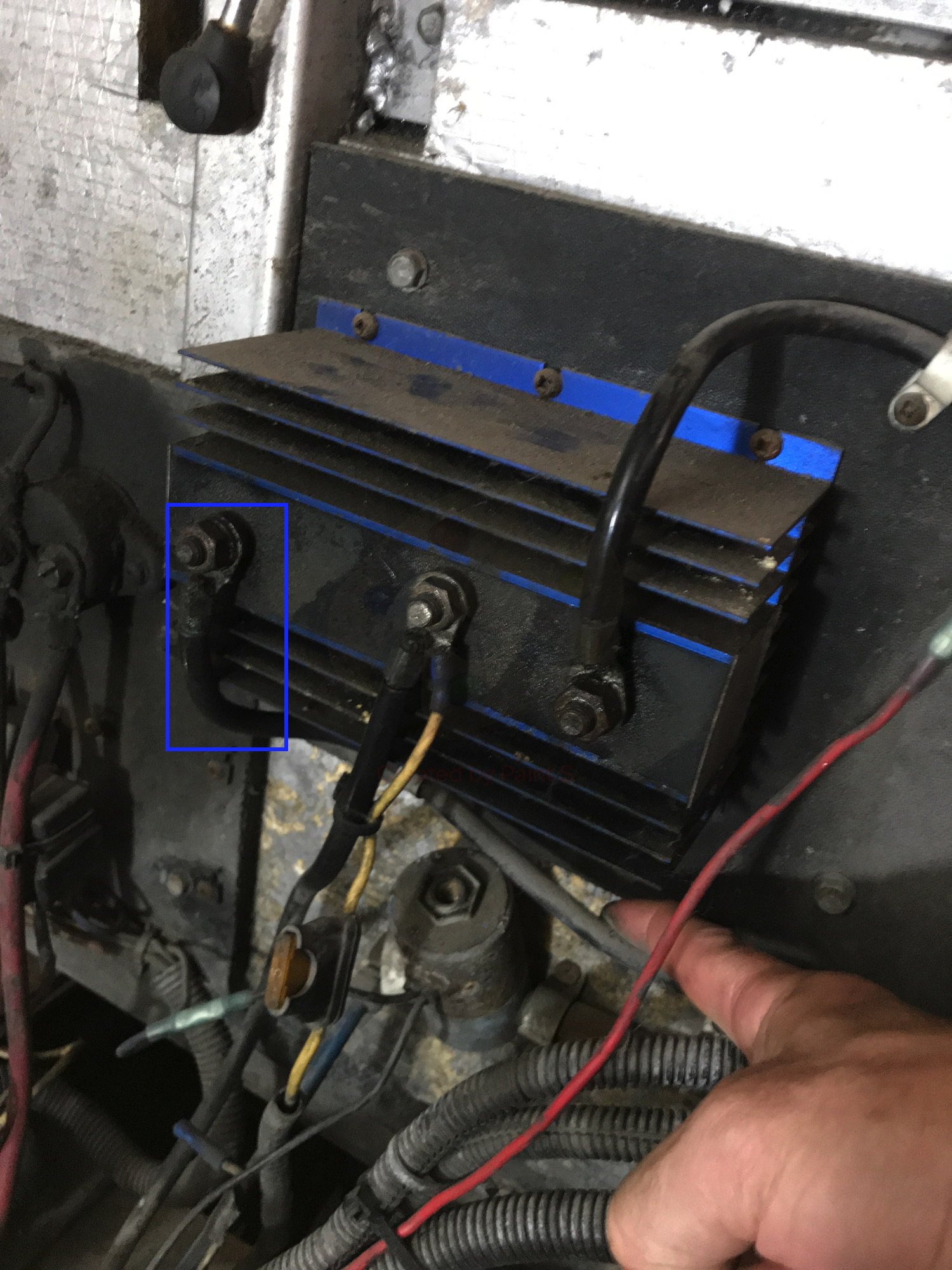 That is the boost solenoid.

Test for voltage at the positive bus buss (located between the isolator and boost solenoid) where the heavy red cable is connected to. If there is no voltage, trace that heavy red cable and see where it connects, it should be connected to the house battery bank positive.
Did you trace where the wire with the red sheathing goes to???

For me personally, this peace meal diagnostic does not work very well, as it is very hard to keep track, and is very frustrating. Sorry, but that is how my mind works, and I'm just about done piecemealing this hours and days apart. It is much easier and more practical for me to have you on the phone and work with you, testing various points on the fly, to try and diagnose and help you with this issue. So, don't be shy, give me a call, I will by more than glad to help you out the best I can. My number is in the first private message I sent you.
John
'95 Serengeti, Cummins C8.3-300
Allison 6spd.
Top
Post Reply
39 posts